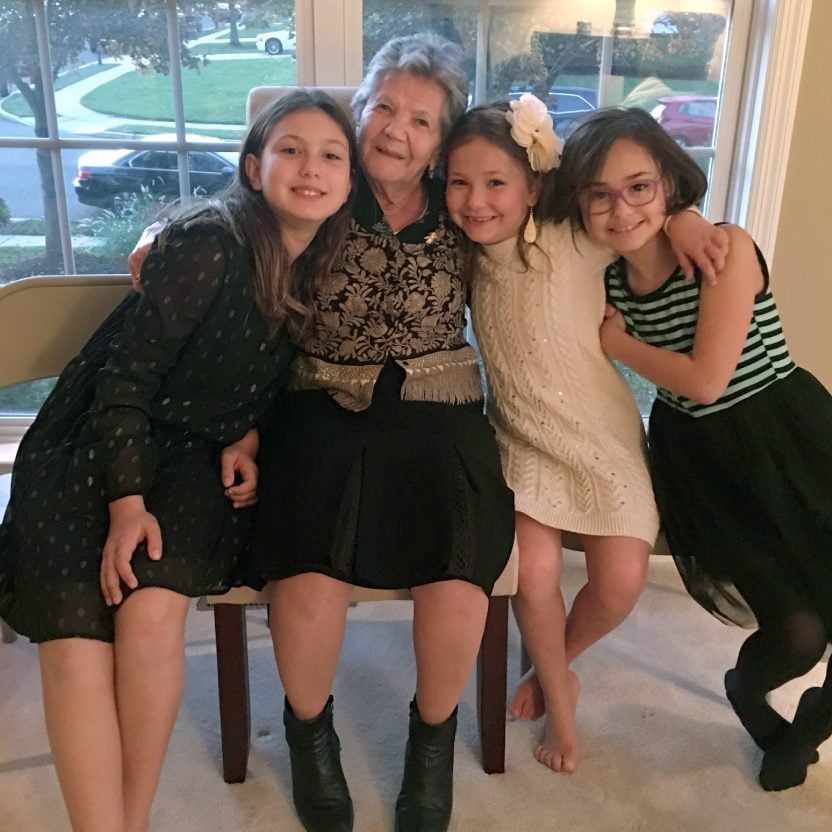 Agnoula Yiantsos was born in 1934 in Ermakia, Macedonia, Greece, to Anastasi and Athena Mantsos. She was the second oldest of eight children, born after Magdalini Mantsou, also honored in this exhibition.

Agnoula’s childhood was riddled with war and poverty. During World War II, her father, the mayor, was taken from their home on three occasions to be executed as a scare tactic for the villagers. Though he escaped death, in one house in the village, over seventy-five people were slaughtered. The village was burnt and rebuilt four times.

Forced to labor in the fields, Agnoula was chopping hay or “bourtsaki” with a large piece of equipment when she fell next to the chopping area, taking off a portion of her pinky finger. This injury would never heal and is a scar still left from her childhood.

At the age of seventeen, Agnoula married her childhood sweetheart, Kosmas Yiantsos. They had three children together, Kostas, Yianni, and Nicko. At full term with Nicko, Agnoula’s water broke as she was picking tobacco in the fields and she delivered him on the spot.

Agnoula developed her hobby of needlework and sewing and became the village seamstress. She specialized in wedding dresses for women and suits for men and went on to dress over fifty brides from her village. Agnoula got a worker’s visa to immigrate to work at Queens manufacturing in Philadelphia. In 1971, Agnoula and her brother Vasili moved their families to America. In 1975, the family opened Jack’s Donuts, a business they were devoted to until they sold it in 2007.

With hard work and prayers, the family worked through the challenges of life together. Now that Agnoula and Kosmas have retired and after sixty-seven years of marriage, they have three sons, three daughters-in-law, nine grandchildren, eight great-grandchildren, and are awaiting the ninth. Yiayia still inspires fear in us all and does a good job keeping us in line, and my kids are always asking when “Big Yiayia” is going to make us more tiropitakia, their favorite snack at school and on the beach in the summer.

“Axia” definitely describes my Yiayia for all she has done and continues to do for our family and her community at Evangelismos Greek Orthodox Church of Philadelphia.