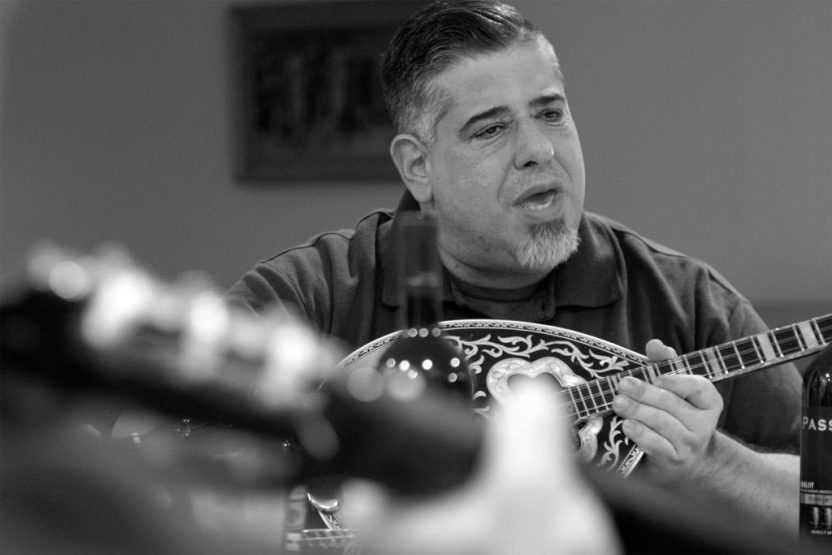 James (Dimitrios) Nicoloudis was born in Pittsburgh 1967. At the age of 5, he began taking private violin lessons which continued for 13 years. He became a very accomplished classical violinist and was invited to play with the Pittsburgh Symphony upon graduating high school. His musical endeavors included many other musical genres. He was a guitarist in many ensembles playing blues, jazz, and R&B. However, his passion for music lied in the roots of his heritage.

Greek music was a staple in his life. It was always playing.

From a young age, the sound of a nisiotiko violin gave him chills. He found the contrast of the traditional island violin players to the classical standard to be intoxicating. When trying to emulate those tones, he received constant criticism from his classical teachers yet he still pushed to learn more Greek music and to play other Greek and Middle Eastern instruments. In Greece, the summer after 6th grade, his grandmother bought him his first bouzouki. He then went on to learn trichordo bouzouki, tzoura, baglama, guitar, lyra, oud, cubus, and various percussion instruments like doumbek, darbuka, and riq.

In 1987 he moved to Philadelphia where began attending Temple University. The move would not only become permanent but would also allow for his love of Greek music to flourish. Playing as a freelance musician, James was hired for a large variety of events playing many different instruments. The crossover to middle eastern music was a natural progression in his continuing musical growth and fortified his abilities in Greek music even further. To this day he studies common Arabic makam to further enrich his abilities in Greek music which has a unique, common origin of intervallic structure and melody. This exercise began while performing at the Middle East restaurant with his mentor Joseph Budway, a virtuoso oud player from Beirut, Lebanon.

Today, he continues to practice daily at his home in South Jersey and play as a freelance musician. James also performs a solo act in restaurants and private parties where you will see him singing and playing a variety of Greek instruments along with his self-produced accompaniments.

You will also find him participating in a number of regularly scheduled gatherings of like-minded Greek musicians who enjoy rebetika. James views these gatherings as a pulse that perpetuates the awareness and appreciation of this music. These sessions are the true meaning of [Greek] music to James and hopes they continue long after he is able to participate in them.