Philadelphia, PA – Two members of the Greek American Heritage Society greeted you with a backstage pass they hung around your neck. After you registered with them, you followed the sounds of the Santouri playing down the hall. Just inside a set of double doors, John Roussos, sat banging away on one of the oldest Greek instruments in history. Behind him, a room full of treasures awaited guests. As you entered the auditorium of the Philadelphia History Museum on Saturday night, you knew you were in for something special, and different. Historic photographs, maps, instruments, lectures, and a short film were researched and prepared to display for Greeks and Philhellenes alike.

The press passes, walls and banners all read, “Welcome to Photo Tour 2018 – A Musical Odyssey, 100 Years of Music history in Philadelphia.” The exhibit spanning 100 years, featured Greek musicians and bands from the Philadelphia area, and traced the roots of Greek music, back to the beginning when Greek immigrants first arrived in the city creating Greektown. Over thirty bands and musicians, like John Argyropoulos, Lefteri Hasselidis, Neo Kyma, Atlantis of Philadelphia and George Giordas were featured. Harry Karapalides, a bouzouki player for Seizmos Music, formerly of Atlantis of Philadelphia and Orpheus, described the importance of preserving the history of these bands when he said, “These bands and musicians, are the soundtrack to our lives. These bands performed at your baptisms, weddings, festivals, dances and social affairs of every kind. We were at your most cherished moments of your lifetime and helped you celebrate.”

The Greek American Heritage Society of Philadelphia initiated the project almost a year ago, searching out who the bands were and their history. The project spanned 100 years, and even revealed a few surprises, like the neighborhood where the oldest bands and musicians played. Tenth and Locust Streets was arguably the heart of the Greek music scene. It was undoubtedly the heart of Greektown. Thanks to the effort of Dr. Kostis Koreleas of Franklin and Marshall College, who recently located transcripts in Tarpon Springs, Florida, that told of some of the earliest rembetiko recordings coming from RCA Victor Studios, just across the river in Camden, New Jersey, this information was revealed to the Heritage Society. There’s long been evidence of rembetiko roots in Philadelphia, especially since both the studios and the record players were being produced by RCA Victor. In fact, Koreleas research suggests that the very first two recordings took place at RCA Victor and the musicians played at a coffee house called the Kafenion at 1018 Locust Street.

Some of the bands from the 1940’s and 1950’s were featured in the documentary film that was presented. The film was produced and written by Eleftherios Kostans, a member of the Heritage Society and Chairman of Photo Tour 2018. “We wanted to introduce our guests to some of the musicians who are still with us and some that have passed,” said Kostans. “It’s all about uniting the generations and preserving the history. That’s what we’re all about”, he added.

MC, Artemis “Tami” Tsinirigopoulos moved the program along smoothly. Food and drink were abundant, and the atmosphere in the room was one of elation and fun. As you walked from display to display, you saw family members and friends reviewing the images and reading over the biographies of the bands and musicians, and the dates and places they played. Many of the musicians who have presently connected with those whose weddings and or baptisms they played nearly half a century ago. George Giordas was arguably the Godfather of the musicians. When we asked other musicians about the most influential musician of the past 100 years, Giordas’ name came up more often than anyone else’s. Giordas’ career spanned from 1963 to 1993, the ‘hey-day’ of Greek music, where big bands and big weekend dances took place. “Five hundred to a thousand people would turn up at a dance,” said Giordas, “and we played everywhere,” he added.

The two and half hour program had certainly made a big impression on the attendees. More than 300 guests attended the event that many said was long overdue. “We should do more of these type of events in the community,” said George Pappas who performed with the Pappas Brothers band. “We need these type of events,” he added. “I’m so overwhelmed with the history we Greeks have here, and the fact that my father is part of it, is truly an honor,” said Viki Zaharias, whose father was a well-known clarinet player in the community.

During the evening’s affair, GAHSP President, Nikolaos Yiantsos was recognized for his years of dedication to the Philadelphia community and GAHSP. He was awarded the first “Hellenic Heritage Hero” award for his efforts spanning some twenty years. Since taking the reigns of the Heritage Society, the organization has grown significantly. He created and enacted several new initiatives and partnerships, with area Universities and local media Cosmos Philly. Their monthly interview series with members of the community and their digital library on their website continue to inspire Greek Americans to get involved and share their stories. “We are a dedicated group of volunteers to Hellenism and invite you to join us,” said Yiantsos as he spoke from the podium on Saturday night.

Museum officials said it was the largest and best-attended event in the history of the Philadelphia History Museum. It begs the question that came up, to others through the evening, but still lies unanswered. Why doesn’t Philadelphia’s Greeks have a museum or culture center of their own yet? It’s apparent with events like this that they need one. Every other sizable diaspora community in North America has one. Why not Philly?

For now, it appears the Greek American Heritage Society of Philadelphia is at the forefront, with this breakout event, which has captivated the Greeks of Philadelphia. We’re looking forward to see what they do next.

The exhibit spanning 100 years, featured Greek musicians and bands from the Philadelphia area, and traced the roots of Greek music, back to the beginning when Greek immigrants first arrived in the city creating Greektown. 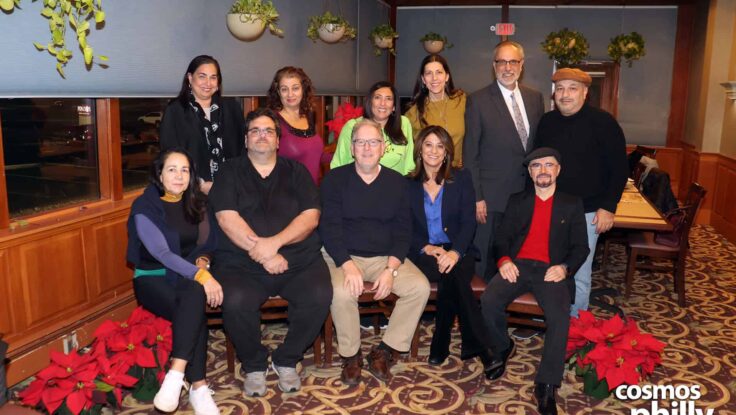